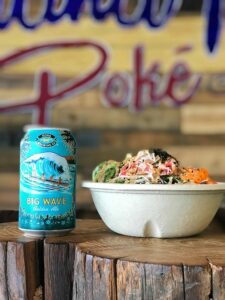 Is the first Illinois location of Island Fin Poké Company the ultimate Hawaii vacation souvenir? For new restaurant franchisees Tom and Jill Browning of Downers Grove, the answer is largely a “yes.”

“When my kids finished high school, we took an amazing family trip to Maui,” said Tom Browning, naming his triplet kids as Susannah, Eric and Will.

Memories of their vacation will come flooding back when they open Island Fin Poké Company in their hometown the week of July 19. The Brownings will be serving up Hawaii-style poké bowls and other island treats like pineapple Dole Whip.

“The trip definitely contributed to our affinity to Hawaii,” Browning said. “And that was a part of what attracted us to the brand and the franchise opportunity.”

Island Fin Poké Company is based in Flordia and was founded in 2016 — around the same time that many of its competitors also placed bets on poké becoming the next global healthy fast food restaurant trend.

Browning comes from a career in advertising and marketing involving famous franchises like McDonald’s, Jiffy Lube and Midas. So he did his research before deciding on Island Fin Poké Company.

“The leadership of the company is really committed to the success of the franchisees,” he said. “The food itself was the final clincher.”

The Brownings couldn’t believe their luck at leasing a Downers Grove location at 76 Ogden Ave., the site of a former Starbucks. And in light of the pandemic, they are grateful the location accommodates patio seating.

“A big part of the experience is walking through the line and picking out the proteins that you want, the fresh ingredients and the marinating sauces and the crunchy toppings,” Browning said. “It’s a real custom order each time.

And for customers who aren’t fans of tuna or salmon in sushi, Browning emphasizes that other protein choices like cooked chicken, tofu and shrimp ceviche are available.

“We also have Spam,” he said. “Which, of course, is a favorite of Hawaii.”